What is Available to Us?

Jacob 1:7-8
Wherefore we labored diligently among our people, that we might persuade them to come unto Christ, and partake of the goodness of God, that they might enter into his rest, lest by any means he should swear in his wrath they should not enter in, as in the provocation in the days of temptation while the children of Israel were in the wilderness.

Wherefore, we would to God that we could persuade all men not to rebel against God, to provoke him to anger, but that all men would believe in Christ, and view his death, and suffer his cross and bear the shame of the world; wherefore, I, Jacob, take it upon me to fulfill the commandment of my brother Nephi.


Context:
This is Jacob describing both his and his brother, Nephi's ministry.

I've talked more about coming to Christ in this post, but I will repeat one of the scriptures used in that post as it defines what entering into his rest means.

Now this Moses plainly taught to the children of Israel in the wilderness, and sought diligently to sanctify his people that they might behold the face of God;

But they hardened their hearts and could not endure his presence; therefore, the Lord in his wrath, for his anger was kindled against them, swore that they should not enter into his rest while in the wilderness, which rest is the fulness of his glory.


My conclusion and thoughts:
We cannot enter into His rest if we cannot endure His presence. Moses could and did do this, and sought to teach it to the Israelites mentioned by Jacob in the first scripture of this post. Jacob mentioned it because he and Nephi were inviting and trying to persuade their family and their people to do this as well. They both had seen the Savior. At least Nephi saw the Savior's life. Judging from this scripture, I'd say Jacob did as well, as they both desired to persuade men to believe in Christ, view his death... Why would they desire to persuade all men to do this, if it was not within the ability of every man to achieve?

Just something to think about... 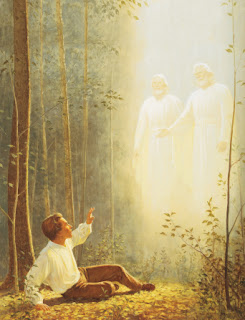 Lately, during fast and testimony meetings, instead of waiting for that burning in the bosom, I've said a little prayer at the beginning instead. In that prayer I ask if I should get up. If the answer is yes, I ask what He would have me say. Verbally, I'm pretty clumsy and I forget my train of thought in the middle as an everyday pastime. So, a little time to warm-up, a little mental preparation is nice. Every time I have asked what to say, I've been told this: "Testify of me."

I bring this up because today is no different. Today I will testify of Him, though I am sorely inadequate to do so, though there are so many that have more to testify of than I do. (Christ - Ephraim Talk, The Second Comforter)

I get weary of the "I know"s in our testimonies, words that do little to prove just that, and I'm sure others have noticed that my children usually say "I believe." I've asked them to do this because there is no shame in belief. That is where faith begins, and that is what leads to knowledge (Check Alma 32 and Lectures on Faith).

Can we have a knowledge of spiritual things without seeing? If we pray to know if the Book of Mormon is true and the Spirit confirms to us that it is, isn't that also a form of knowledge?

It does give us a witness of that thing.

In any case, I hope my children won't adopt the "I know" to something because that's what I or their teachers have taught them... But I hope they adopt it when they've learned something for themselves, and can say in all honesty that they know because God has taught them.

I can't say I know that He lived, in the sense that I have not witnessed His life. I can't say that I know He was resurrected for the same reason.

I know that He did because He has spoken this to my heart. I can say that He lives still because I know Him. I know His love for me. His capacity of love for each of us, even the least of us. I know He is patient. I know He is kind. I know He answers questions when I ask them (the answers of which sometimes surprise me). I know He can and does forgive us of our sins because He has done that for me. I know He is gentle when we ask for His guidance. I know He offers comfort when we have nowhere to turn for peace.

His will is His Father's will, something we need to adopt as well.

I know we have the choice to follow Him. It is a conscious and every day, every moment choice. It is something we do individually, something spoken to us individually.

Something that may lead to us having to choose between following the institution of the church, or following the Spirit that in one specific case is asking us to do something else.

There is only one "yes" answer to those questions, and it is scriptural. The others...

I've made my choice. I know who I choose to follow. I know He will never lead me astray because He is the way.

and there is no other.


3 Nephi 18:25
And ye see that I have commanded that none of you should go away, but rather have commanded that ye should come unto me, that ye might feel and see; even so shall ye do unto the world; and whosoever breaketh this commandment suffereth himself to be led into temptation.

All who were present among the Nephites when Jesus came to the Americas in the city of Bountiful, saw Him, and felt His wounds. He commanded them to do this, and then He commanded them to command the world to do the same. The Book of Mormon speaks this commandment to us. Come to Him. See Him in the flesh as they did. Feel His wounds.

D&C 93:1
Verily, thus saith the Lord: It shall come to pass that every soul who forsaketh his sins and cometh unto me, and calleth on my name, and obeyeth my voice, and keepeth my commandments, shall see my face and know that I am;

Every soul, not just men of a certain standing and position. God is no respecter of persons. Why do we keep trying to make Him into just that? Every soul.

Note that it says obeyeth my voice. We must know and recognize His voice if we are to obey it. That is an individual thing, the burden of which rests only upon us. Further reading from this site that is relevant: get it right, learn by what means we are to understand the scriptures, lower ourselves to the dust.

D&C 84: 23-24
Now this Moses plainly taught to the children of Israel in the wilderness, and sought diligently to sanctify his people that they might behold the face of God;

But they hardened their hearts and could not endure his presence; therefore, the Lord in his wrath, for his anger was kindled against them, swore that they should not enter into his rest while in the wilderness, which rest is the fulness of his glory.

Has the doctrine changed? Is this no longer true?

Moroni speaking in Ether 12:39 & 41
And then shall ye know that I have seen Jesus, and that he hath talked with me face to face, and that he told me in plain humility, even as a man telleth another in mine own language, concerning these things.

And now, I would commend you to seek this Jesus of whom the prophets and apostles have written, that the grace of God the Father, and also the Lord Jesus Christ, and the Holy Ghost, which beareth record of them, may be and abide in you forever. Amen.

Is He telling us to seek Jesus, just by believing in Him? Then why would He say He had seen him, unless He was telling us that we could see Him as He had seen Him? That would be like saying, "I've seen Him and you should go to Him, but you don't get to see Him like I did." That would be saying again that God is a respecter of persons, which we know He is not.

Nephi and his brother Jacob both saw Jesus Christ. 1 Nephi reads like a road map of Nephi's life, explaining how he received what he did. These were things he considered of worth for us. The doctrine of Christ in 2 Nephi 31-32 also reads like specific guidelines for us to receive Him.

I testify of this doctrine, not because I have received a fullness of it (I have yet to receive that). I testify of it as the Spirit has testified of it to me. That it is true. Following this doctrine has brought me closer to my Father and my Savior than anything else has before. It is why I can say in confidence that I know Him, though I have not seen Him.

I don't ask you to believe me in this, but to ask your Father in Heaven with a sincere heart if it is so.

If it is something you desire and the Spirit confirms it, I suggest you then ask what lack I yet? And allow Him to answer in the manner that He will.
Posted by Sarah at 2:55 PM No comments: