On September 20, 2014, I was re-baptized. To many who know me, this will sound very strange. To those that are familiar with this blog, you'll get to hear some of the story behind my profile picture. 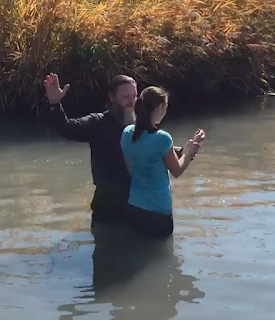 You may wonder why I would need/want to get baptized again. I'll explain this as best I can.

First off, I have never been excommunicated, disfellowshipped or otherwise disciplined. This event had nothing to do with anything like that.

I had heard of re-baptism several months previous to this and thought it was a curious thing that perhaps I'd like to try some time if given the opportunity. As time wore on and the desire of my heart to know the Lord only became stronger, this appealed to me more and more as a way to witness a renewing of my desires and dedication to God.

As I have explained to a small degree in my Baptism of Fire post, around 2 years ago I experienced a life altering awakening, and shortly after that the Baptism of Fire. Some of the things I awakened to was that salvation is personal; repentance involves the whole heart; heaven can and does converse with man (any man/woman) still today through dreams, visions, angels, gifts of the Spirit, etc.; the invitation to see God face to face is universal; the church and its leaders can and do lead us astray; and obedience to them is NOT the same as obedience to God. Since then it has felt like my life has been turned upside down. I am a different person, a new person. Things that were once important to me, no longer are, and things that I once thought were not that relevant to my life, now are.

Because I felt so different, the idea of witnessing this change with a new baptism seemed right.

I had learned that rebaptism wasn't a weird new thing. It was actually practiced during the restoration, and there was precedent for it in the Book of Mormon. It was done according to the instructions of Christ when he arrived in the Americas. He instructed Nephi and a few others on how to baptize those that Nephi had gone about baptizing prior to Christ's appearance.

My prayer around this time was something to this effect, "Heavenly Father, if I should get baptized again, please provide an opportunity and a way."

For months this opportunity did not arrive. I had been closely following this lecture series, and when the last lecture gave direction for re-baptism on September 9th, I saw in this the opening of the opportunity I'd been looking for.

Sure enough, others with the same desire as mine organized a gathering on the 20th for re-baptisms in living water within an hour of where I live, and I wanted to go.

The problem was, I needed to pray again. This desire of mine was causing distress to members of my family, and if I was going to do it, I had to know it was something God was directing me to do personally. (I've talked a little about gaining authority to baptize here, and am not addressing it in this post, though it is relevant)

When I prayed, my answer about whether to be baptized was definitive and immediate. I'd like to describe how it came, but I think this detail I'll leave to myself. I will say this much here: The Lord is calling for those who believe in His message this day, to be baptized in His name and according to His words in 3 Nephi 11. Things are happening now. Things are changing, and if you are content to let others do all the thinking for you, then you will miss it.


Things became harder after this. Family members became offended and confused about my decision. I found myself asking one such family member, "When is getting baptized in the name of Jesus Christ ever a bad thing?" I had to explain that I was not joining another church. The organizers and attendees were also members of the church (although some may have been former members). We weren't doing this to start a new church. We were doing it as a personal witness to God that we were willing to do as He was asking us. That we were willing to take His name upon us. That we believed His message to us today. There was no obligation to any legal organization tied to this baptism, just to God, and that was the beauty of it.


Matthew 18:20
For where two or three are gathered together in my name, there am I in the midst of them.

D&C 10:66-67
Yea, if they will come, they may, and partake of the waters of life freely. Behold, this is my doctrine--whosoever repenteth and cometh unto me, the same is my church.

I could go on about what the meaning of God's church is scripturally and how it isn't tied to a single earthly organization as our linear LDS minds insist on making it, but I'll say that the Church of the Firstborn in the scriptures IS NOT the Church of Jesus Christ of Latter-Day Saints. There is a reason He did not give that name to the church when it was founded. If you need to look more into this for yourself I suggest you search the scriptures. You can start in D&C 76.

When the day finally came, I can't describe the relief I felt as the hot springs water surged around my face, burying my body beneath the surface of the pool. I can't describe the relief that leaked from my eyes when I was again on my feet and stumbling emotionally back to shore. The Spirit assured me this ordinance was recognized, dressed as I was in ordinary jeans and a blue shirt.

I have not and do not regret it. I'm thankful for those family members who, though they didn't understand it, were willing to accept that it was important to me, and accept me still. I'm thankful that I was given the opportunity and a way to accomplish it.


There is a lot of misunderstanding occurring about these rebaptisms in the church:

There have been so many excommunications over this very thing, lately. Some members view this distrustfully and negatively. Some take personal offense to it. To those I ask, Why do you find rebaptism in the name of Christ by a member offensive? Why would that be a bad thing? Why would it be a thing worthy of expulsion from the church? Baptism is the doctrine of Christ, nowhere in the scriptures does it say it's an ordinance that mustn't be repeated. That is the common practice in our church in our day, but that doesn't mean it is correct.