Our Judgement Vs. Righteous Judgement 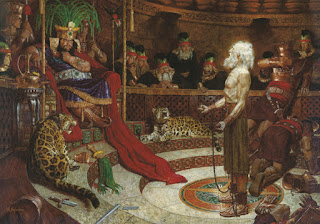 Our culture is saturated with unrighteous judgment. The media we are exposed to is composed of this to an alarming degree. We think it's our right to judge the behavior and appearance of others. Ridicule and criticism is expected and in some cases rewarded.

We compare and judge others against our standard or ourselves, either determining others to come up short, or that we come up short as individuals.


Here's what the scriptures say about judgement:

Mormon 8:19-20
For behold, the same that judgeth rashly shall be judged rashly again; for according to his works shall his wages be; therefore, he that smiteth shall be smitten again, of the Lord.

Behold what the scripture says--man shall not smite, neither shall he judge; for judgement is mine, saith the Lord, and vengeance is mine also, and I will repay.

Moroni 7:18
And now, my brethren, seeing that ye know the light by which ye may judge, which light is the light of Christ, see that ye do not judge wrongfully; for with that same judgement which ye judge ye shall also be judged.

John 7:24
Judge not according to the appearance, but judge righteous judgment.

John 8:7
So when they continued asking him, he lifted up himself, and said unto them, He that is without sin among you, let him first cast a stone at her.

I'm only going to give context on the last scripture this time, since I feel the others are self-explanatory. For more context on the second scripture read this, or you know, even better just read the chapter for yourself.

During this part of John, the scribes and Pharisees brought a woman before him who was caught in the act of adultery. They brought her to him citing the law of Moses. The scriptures say they did this to tempt Him, "that they might have to accuse him." After Jesus says what is quoted in the scripture above. They leave until only Jesus and the woman remain.

The only one that stayed was He that is without sin, Jesus.

How are we to judge?

Matthew 7:1(JST)-2
Now these are the words which Jesus taught his disciples that they should say unto the people. Judge not unrighteously, that ye be not judged: but judge righteous judgment.

For with what judgement ye judge, ye shall be judged: and with what measure ye mete, it shall be measured to you again.

We must judge righteously.

This is like karma. What judgment you dole out will be returned to you.

Conclusion: So, how do we know if we are judging righteously?

As God is the only righteous judge...

Since judgement is His...

Since vengeance is His...

And since man is not to judge...

But His people are told to judge righteous judgment...

Then judging righteously is allowing the Lord to judge, and not to judge for ourselves. It's to withhold our own judgment and deliver judgment only as the Spirit of the Lord directs us. It's not to make rash assumptions, nor to hold ourselves above anyone else.

It's to trust in Him. And to live in love and forgiveness of others.
Posted by Sarah at 3:06 PM