We, the Idolatrous LDS 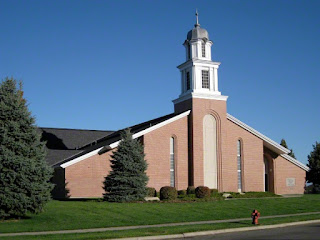 We, as members, have idols specific to us.

Because of our religious idols we have become like the Jews of Jesus' time, or like Laman and Lemuel of Nephi's time.

Our LDS Idols:
- The church
- The current president of the church
- The brethren
- The priesthood
- Our ordinances
- The keys and authority
- The handbook
- Callings
- Our reputations within our ward, stake, etc. (or "to be seen of men" Matthew 23:5)
- Our pioneer heritage/beginnings
- The LDS traditions of our fathers

There are probably so many more than that, but this is the list I will work off of for the intents of this post. I'm sure some that will come across this will be wondering how a lot of the things on the list can be a bad thing. I'll explain as best as I can.

The Church as an Idol:
I hear many testimonies of the "living church" or "true church." This is what is concerning about that: if our church was like the church of the Jews at the time of Christ, how would you know it, if all your faith and devotion depends on it being always true and always living (which I take to mean always led by God)?

Bad news: You would have rejected Christ in His day with that mentality, as He was rejected and even sentenced by/because of the church of His day.

Our focus is not supposed to be on the church, or on it being living or always true, but on Christ. He is the one that is living and always true.

Churches are staffed, led, manned by men, and men err. Men fail to recognize their own God before them ...Unless that church happens to be the Church of the Firstborn, which is NOT an earthly institution.

Now the gospel... Christ's gospel... that is always true. That does not change, and remains the same, though men misunderstand and alter their records and teachings of it.

The Prophet and the Brethren as Idols:
I think we should be wary whenever calling someone a prophet when it is by inherited title, and not by evidences, because then we run the risk of making a good person into a false prophet simply by fault of the inherited title. Prophets used to be called prophets because the people could see from their works, and from their messages that they were prophets.

Why was Joseph Smith called a prophet?

Because he prophetically translated the Book of Mormon. Because he received revelation from God. Because he prophesied. Because he called the people to repentance as prophets are supposed to do. Because he spoke with and was visited by God, and he proclaimed that. He also encouraged everyone else to receive God as he had, in the flesh, as one man speaks to another. He did not covet these experiences only for himself.

For some reason, because we always have a president of the church, whom we call prophet, we now expect him to see God for us. We expect to follow him no matter what, and that doing this will ensure we will receive eternal life. We testify of him. We adore and fawn over him.

Interestingly enough Ezekiel 14 is a chapter Joseph read to the newly organized relief society (I had heard about it before, but I came across this and some other interesting things he said in the Nauvoo Relief Society Minutes when preparing a trivia game for a R.S. activity)

Here are the relevant notes taken about what Joseph said about depending on the prophet for your salvation:

"Prest. J. Smith rose, read the 14th Chap. of Ezekiel— said the Lord had declar’d by the prophet  that the people should each one stand for himself and depend on no man or men in that state of  corruption of the Jewish church— that righteous persons  could only deliver their own souls— app[l]ied it to the present state of the church of Latter-Day Saints— said  if the people departed from the Lord, they must  fall— that they were depending on the prophet hence were darkened in their minds from neglect of themselves— envious toward the innocent, while  they afflict the virtuous with their shafts of envy."

Ezekiel 14:4-6
Therefore speak unto them, and say unto them, Thus saith the Lord God; Every man of the house of Isreal that setteth up his idols in his heart, and putteth the stumblingblock of his iniquity before his face, and cometh to the prophet; I the Lord will answer him that cometh according to the multitude of his idols;

That I may take the house of Israel in their own heart because they are all estranged from me through their idols.

Therefore say unto the house of Israel, Thus saith the Lord God; Repent and turn yourselves from your idols; and turn away your faces from all your abominations.

Ezekiel 14:14, 16, 18, and 20
Though these three men, Noah, Daniel, and Job, were in it, they should deliver but their own souls by their righteousness, saith the Lord God.

Though these three men were in it, as I live, saith the Lord God, they shall deliver neither sons nor daughters; they only shall be delivered, but the land shall be desolate.

Though these three men were in it, as I live saith the Lord God, they shall deliver neither sons nor daughters, but they only shall be delivered themselves.

Though Noah, Daniel, and Job, were in it, as I live, saith the Lord God they shall deliver neither son nor daughter; they shall but deliver their own souls by their righteousness.

Though we may be led by good and righteous men, our salvation is only achieved through our own righteousness. Setting good men like this up as idols will hinder us, not help us. We need to have a relationship with God for ourselves. We need to go to Him with our questions, and look to Him for our answers.

Also along this note: read D&C Section 76 and study all the different kinds of people that will be in the Telestial Kingdom. Notice that the first things mentioned are those who are "of" the prophets, or you could say those who "Followed the Prophets." This is Telestial behavior.

In the Lectures on Faith it says we first believe on the testimony of another (like those of the prophets), but after that we must achieve faith and then knowledge. These last two are not things that we get through others. They are things we gain and achieve as individuals, leading to knowledge given to us by God, just as the prophets received for themselves.

Teachings of the Prophet Joseph Smith p. 149
"...God hath not revealed anything to Joseph, but what He will make known unto the Twelve, and even the least Saint may know all things as fast as he is able to bear them, for the day must come when no man need say to his neighbor, Know ye the Lord; for all shall know Him (who remain) from the least to the greatest. How is this to be done? It is to be done by this sealing power, and the other Comforter spoken of, which will be manifest by revelation."

If you are not familiar with this blog or what the other Comforter is, it is Christ appearing to you Himself. I have spoken more about that in other posts, particularly here, as have many others who know about it more personally than I do myself.

I have seen scripture being ignored in favor of general conference talks. If one contradicts the other, what do we do? We favor the current brethren's words over scripture because the scriptures were for those other people that lived a long time ago, right? And this is today. We're different than they were. We aren't as faithless as they were, so their problems and counsel don't apply to us. We can't be led astray because we always have a prophet who can't be led astray. (Please tell me you are catching on to my sarcasm, and can see our latter-day pride for what it really is.)

...And yet, the Book of Mormon prophets directed specific comments to us. We have all of these records that show the pitfalls of different groups of God's chosen people that have gone before us. The cautionary tales of how they strayed, of how they rejected His messengers, of how they lost the wonderful things that were given to them. We ignore them at our peril. We honor the word of our day over what has always been true at our peril.

We shouldn't idolize men, no matter what their role. After all, God is no respecter of persons, so why are we? God and His Son are the only ones worthy of our worship.

To be Continued...
This is already very long, and I've only begun to scratch the surface. I will be continuing this later with other things on the list and how we turn them into idols. Click here for Part 2, Dead Works.